If you showed up at least one day for a high school history course, you know that at one time the British Empire controlled a very large chunk of the earth. Enormous swaths of Africa, modern India and Pakistan, Canada, Australia, New Zealand and assorted islands around the world.

Since its apex at 1921, the British have been letting the empire slip away by giving everyone independence. Egypt, India, Malaysia, Singapore, South Africa and Ireland, among many others, went their separate way.

Here’s an interesting question: What was the last piece of real estate claimed by the British? 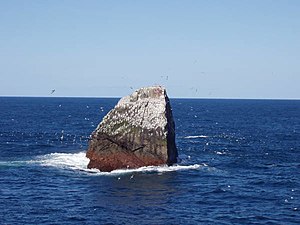 Rockall Island isn’t much of an island. It’s only claim to fame in history was being the cause of several sea disasters. (its pretty small, so even if you know its there, you could easily hit it) Its about 80×100 feet wide. No humans have ever established a permanent presence there.

In 1955, the British Navy sent a ship there, dropped some guys off via helicopter and had a little ceremony. They raised the Union Jack, said some words, and left a plaque with the following:

“By authority of Her Majesty Queen Elizabeth II, by the Grace of God of the United Kingdom of Great Britain and Northern Ireland and of her other realms and territories Queen, Head of the Commonwealth, Defender of the Faith, and in accordance with Her Majesty’s instructions dated the 14th day of September, 1955, a landing was effected this day upon this island of Rockall from HMS Vidal. The Union flag was hoisted and possession of the island was taken in the name of Her Majesty. [Signed] R H Connell, Captain, HMS Vidal, 18 September 1955.”

That, my friends, is how empires are built.

We American are not immune to building our empire in this way either. If you think of what comprises the United States you will probably come up with the 50 states, Washington DC, Puerto Rico, the Virgin Islands, Guam and American Samoa. That indeed does cover most of it, but we also own our own share of rocks sticking out of the water.

Among the uninhabitated islands we own is a little thing called Kingman Reef. Kingman Reef has the unique distinction among overseas territories of not existing most of the time. Its usually underwater. Always has been.

How did we come get this spot of sometimes land in the Pacific?

In 1922 one Lorrin A. Thurston landed and read the following proclimation:

Be it known to all people: That on the tenth of May, A.D. 1922, the undersigned agent of the Island of Palmyra Copra Co., Ltd., landed from the motorship Palmyra doth, on this tenth day of May, A.D. 1922, take formal possession of this island, called Kingman Reef, situated in longitude 162 degrees 18′ west and 6 degrees 23′ north, on behalf of the United States of America and claim the same for said company.

They also stuck the proclamation and other artifacts in a jar and put the jar under a pile of coral rubble. That was to make it more official I guess.