In my trip to Hawaii in May, I had the pleasure of visiting a place which few tourists ever get to see. It’s literally off the beaten path. There are no paved roads. You have to walk or take a 4-wheel drive to get there. There are no signs pointing to it. There is nothing noting its existence once you’re there other than observing the color of the ground. It is one of only two places on Earth like it (the other being in Guam). Even though I didn’t spend more than two hours there, its probably one of my favorite places on the planet.

Its the green sand beach of Papkolea.

You can tell from the satellite photo that the sand actually has a green tint to it. The reason why its not totally green is that the sand is made out of the mineral olivine (Mg,Fe)2SiO4. Iron rich olivine is called faylite and has an amber color to it. Magnesium rich olivine is called foresterite and it has a green color. Gem quality olivine is commonly called Peridot. (Birthstone for August. Go August!) Individual grains can be anywhere in between the amber and green end members.

Olivine is actually one of the most common minerals in the Earth. It comprises a large part of the upper mantle, but its very uncommon to find on the surface. Like diamond, olivine is stable under high pressures and temperatures. You only find it in places where it was taken to the surface by volcanoes. I easily found olivine embedded in basalts along the roadside on the big island. 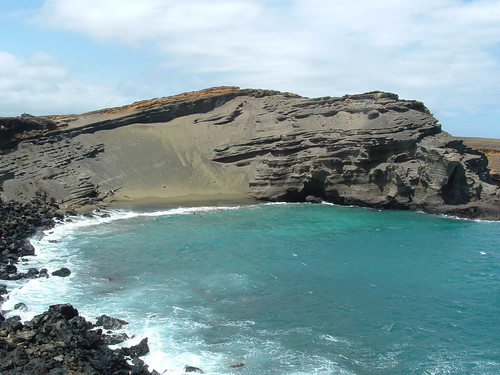 You’ll notice in the photo (not taken by me. I forgot my camera) that the layers are sloping downwards towards the land. This is because the entire beach is the eroded remains of a cone. The peak of the cone would be about 100-200 meters off the coast. The ash and basalt eroded away faster leaving the green olivine and the beach.

The great part about the beach is its isolation. Not only is it out of the way from most tourists, you also have to climb down into the beach. There is no easy walking path. There might have been 4-6 other people there while we we’re there, and we were a big group. The enclosed nature of the beach makes the waves strong and great for swimming and snorkeling.

If you ever find yourself on the Big Island of Hawaii, take the time to drive to South Point (the absolute southern most point in the 50 States) and walk to the green sand beach. You will not regret it.

3 replies on “Green with envy”

Is this the kind of content we can look forward to on your trip?